The History of The Boar's Head Capel Street - DublinTown ​

The History of The Boar’s Head Capel Street

The Boar’s Head pub sits at the corner of Capel Street and Mary’s Abbey, a most historic setting in the city of Dublin.

Capel Street refers to name of the Lord Lieutenant Arthur Capell, 1st Earl of Essex. When developers were looking to gain favour to build in parts of the city, it was common practice at the time that an area would be named after the most powerful Crown Administrator in Ireland. In this case it was Arthur Capell (also spelled Capel), when the street was being developed by Humphrey Jervis after he and his associates bought 20 acres of the lands of St. Mary’s Abbey in 1674 from Richard Power, 1st Earl of Tyrone, for the sum about £3,000. 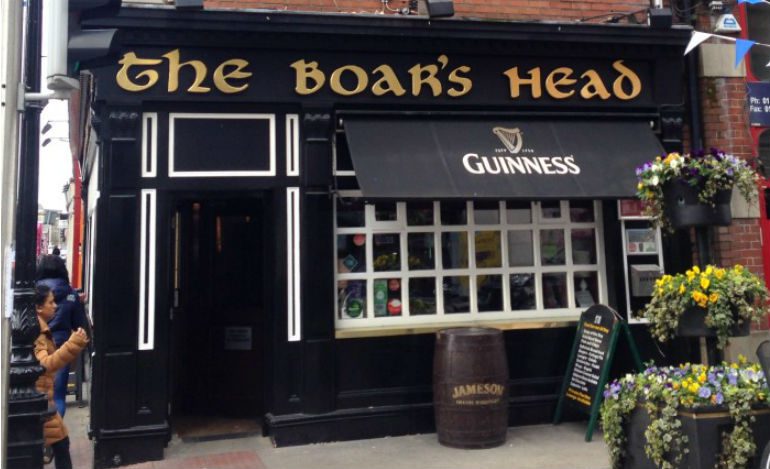 As the Earl of Essex, Arthur Capel also got Capel Street Bridge, originally called Essex Bridge, named after him. Its proper name since 1872 is Grattan Bridge, after Henry Grattan. The other street at the corner of The Boar’s Head is Mary’s Abbey, which refers to the lands of the old Cistercian Abbey of St. Mary, which was first developed in the 12th Century and covered a large area along the north bank of the River Liffey. However, after the dissolution of the monasteries under the reign of Henry VIII, St. Mary’s fell into decline. Later the Moore family made the Abbey their Dublin residence up to the close of the 17th century, and it was Henry Moore, 1st Earl of Drogheda, who built himself a mansion on what is now O’Connell Street, and developed Henry, Moore and Earl streets.

All that remains of the Abbey today is the Chapter House, located just at the north to the rear of The Boar’s Head. It was from this Chapter House that Thomas FitzGerald, better known as Silken Thomas, rejected the rule of King Henry VIII in Ireland in 1534. 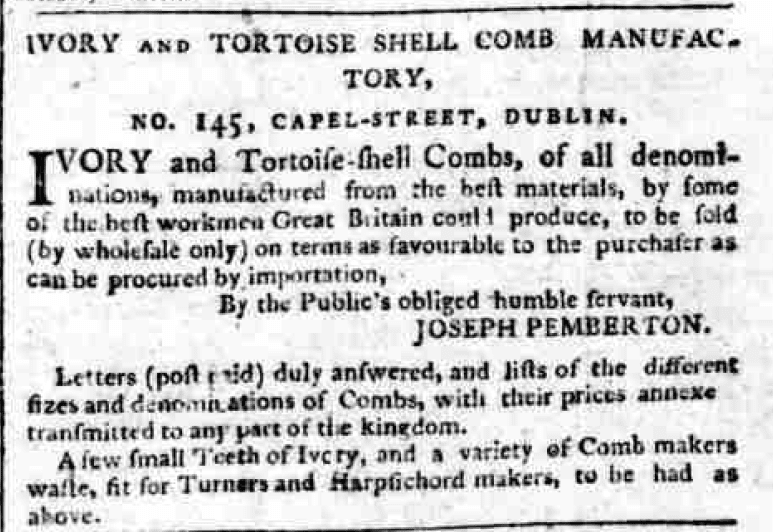 By the end of the 18th Century Capel Street was one of Dublin’s most desirable addresses, with a fine view of City Hall, completed in 1779 and captured in the sketches of James Malton at the time. By the late 18th Century, the spot now occupied by The Boar’s Head was not a public house, however, but was the business premises of Joseph Pemberton – who made combs and brushes from materials like ivory and tortoise shell.

In 1835, Messrs Edward Hopper and Nathan Harvey were refused a publican’s licence for the premises on the account that there were “too many Irish public houses already operating in the neighbourhood”. But just two years later, the earliest references for alcohol being sold from the premises appear when it is listed as selling “Grocery, Tea, Wine, Spirit and Malt Drink”. 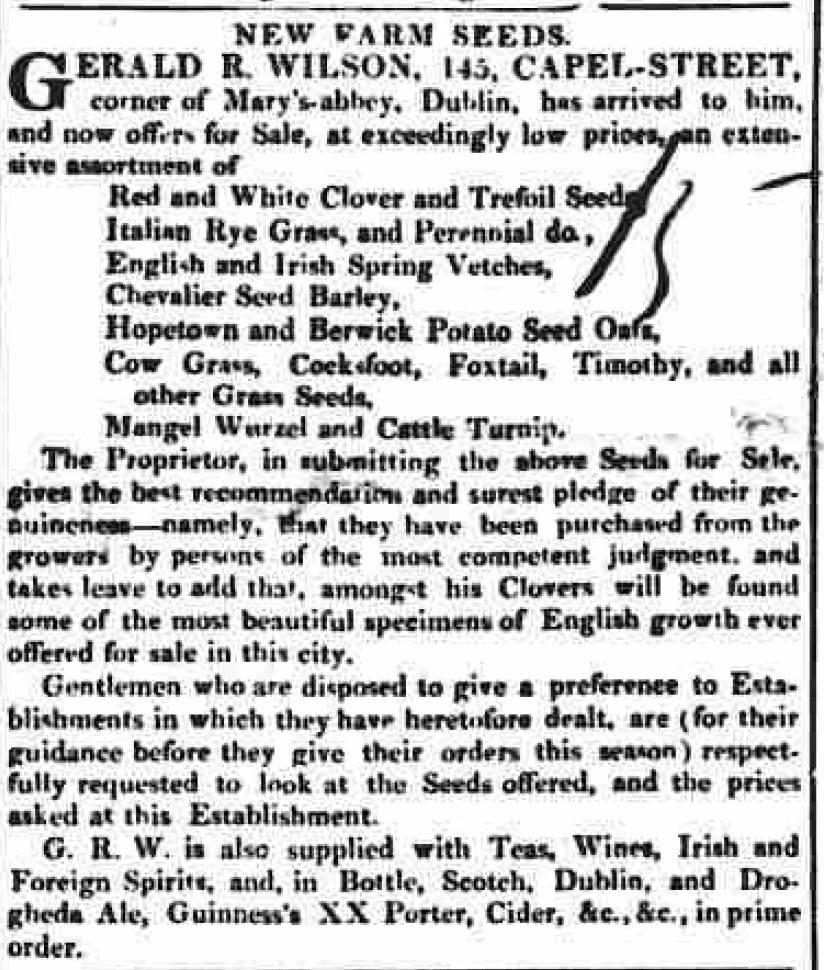 A newspaper advertisement from 1839

This was from 1837 onwards when the property was in the ownership of the Wilson family, however Gerald Wilson’s main business wasn’t in the sale of alcohol…but in seeds! In what might seem a strange business mix, his business sold seeds for grass, herbs and vegetables to farmers who were a regular sight in the area due to its proximity to Smithfield and the routes to the rich farmlands of north Dublin.

As well as being a successful businessman, Wilson was also politically active and was involved in the Reform Club, founded by Daniel O’Connell, and was a supporter of the of the movement to repeal the Act of Union and give Ireland back its Parliament. Wilson also regularly appears on lists of benefactors of various city charities. The Wilson family ran the business into the 1870s, and it seems at one stage that may also have owned the famous Wren’s Nest pub in the Strawberry Beds. The business was run first under Gerald, until his passing in 1863, and then under his daughter Margaret Wilson until her death in 1877. Margaret never married or had children but left a sizeable will, which donated large sums of money to various good causes throughout Dublin City. 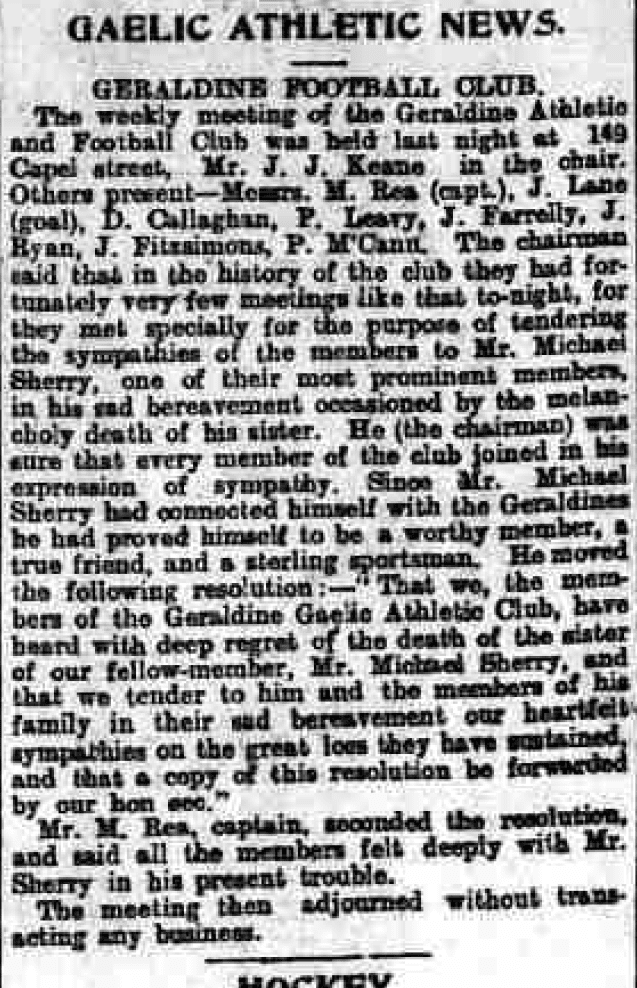 After Margaret’s death in 1877 the premises, described in the auction notice as “Grocery and Spirit Establishment”, was sold to John Behan for the price of £8,695.
The Behan family would own the pub well into the following Century, first under John Joseph Behan and then the brothers Thomas and Patrick Joseph Behan. In fact, it was well known as Behan’s Pub. The area was growing and developing around this time. The opening of the City Markets building in 1892 meant that Capel Street and the surrounding area was busy from early morning with farmers, wholesalers, grocers and other market workers.

This new activity brought greater trade to the area and meant that the streets surrounding the markets featured many “early house” pubs to cater for the morning trade. This is the case even to this day, with pubs like The Boar’s Head and Slattery’s still opening around 7am each morning. The history of Behan’s was quite eventful. Initially the family lived on site at the pub and John Joseph Behan (sometimes styled as J.J. Behan or just Joseph Behan) was obviously a man well known in the area and was subsequently appointed as a deputy to City Marshall Charles Kavanagh in 1891. Kavanagh himself was a somewhat larger than life character, who is mentioned by Leopold Bloom in James Joyce’s Ulysses. 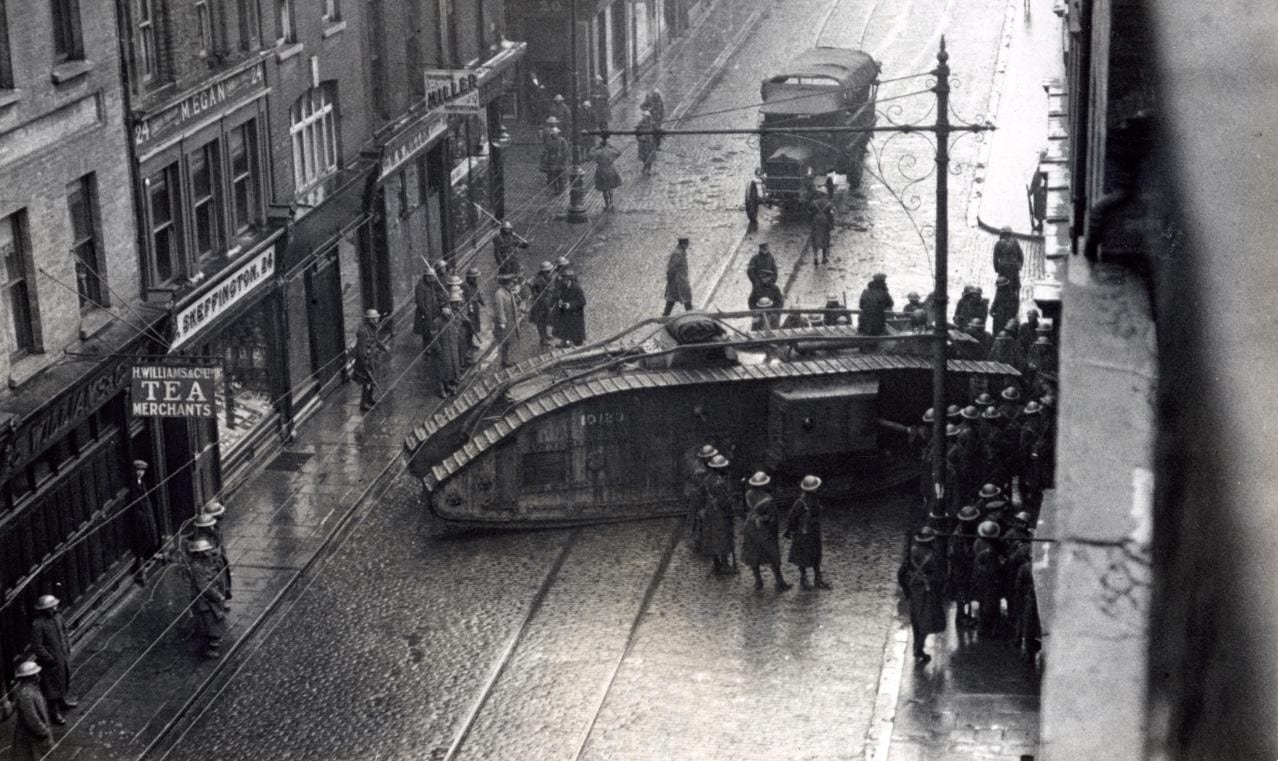 British Army tank outside 149 Capel Street, then owned by the Behan family (1920)

The early decades of the 20th Century brought plenty of turbulence to the area. In the years spanning the rising of 1916 through to the ceasefire of the Civil War in 1923, Capel Street and the surrounding area witnessed more than its fair share of violence. While larger scale incidents like the North King Street massacre by Crown forces in 1916 or the bombardment of the Four Courts during the Civil War are well known, there were many other less well-known acts of violence in the area. Random shootings and robberies, police officers being gunned down in the middle of the street, curfews and barbed-wire cordons in the area also featured heavily.

During one such lock-down in January 1921 Capel Street was effectively sealed off and flooded with army personnel, while a British mark V tank was seen directly in front of Behan’s Public House. As bad as tanks were for business, less than a year earlier Patrick Joseph Behan was lucky to escape with his life after he was shot following an attempted robbery.

Figure 1: Vivid report of the shooting from the Skibereen Eagle, May 1920

Behan was cashing up late at night when an armed intruder shot him in the doorway of his pub. He was tended to on the scene by neighbouring publican Thomas Dobson before being rushed to the nearby Jervis Street hospital, which is now part of the modern-day Jervis Shopping Centre. Due to the breakdown in law and order during the Revolutionary period there was a significant increase in the number of robberies and violent crimes in this time period, so this almost-deadly attack against the unfortunate Mr. Behan shouldn’t seem too out of the ordinary for the time period. 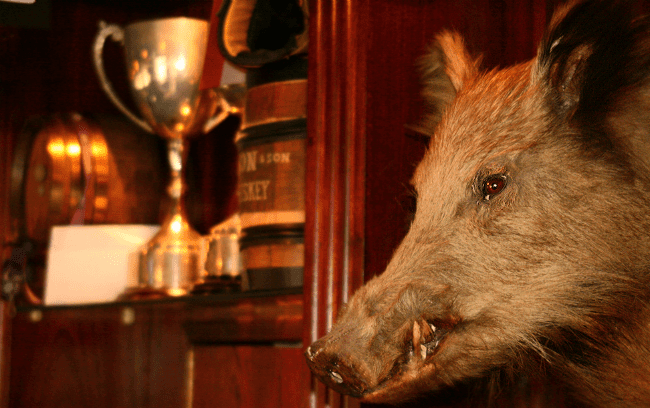 In the 1920s the premises were bought from the Behans and briefly run as Doyle’s before the passing of publican Michael Doyle in 1928. For several years after that it had various incarnations. In the early 1940’s it was first McDonald’s and later Kennedy’s Pub, by 1950 it was Ryan’s and by the end of the 50’s it was even known as Slattery & Nealon’s, two names familiar to anyone who has ever ventured for a pint on Capel Street.

For the last 25 years the pub has been run by Hugh and Ann Hourican, after they returned from New York to buy out the pub from Hugh’s uncle who was retiring. By this time the pub was known as The Boar’s Head, owing to a particularly impressive mirror in the bar which featured the now-defunct “Boar’s Head whiskey” brand, although a stuffed Boar’s Head, replete with sunglasses does sit above the bar now. They also successfully redeveloped the bar from a modest single story building into a three story pub that we know today, with kitchens and an upstairs bar and function area. 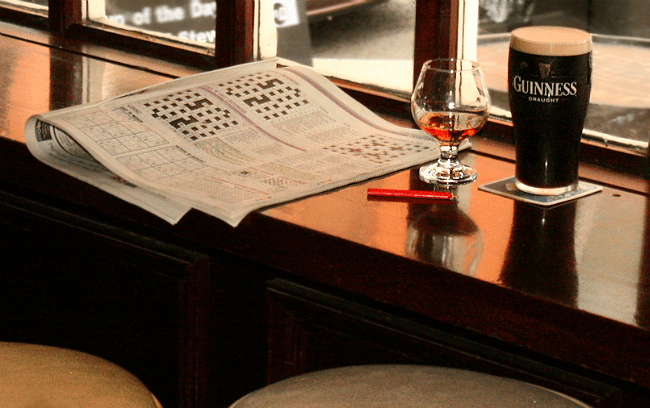 In modern times, the pub is probably most famous for its sporting connections, a tradition that dates to the turn of the 20th Century when the Geraldines Gaelic Athletic Club used the pub for its meetings. This strong connection with the GAA was given greater prominence when Páidí O’Sé brought a victorious Kerry football team to The Boar’s Head to celebrate their All-Ireland win in 1997.

This is something that quickly because a tradition, and many successful GAA teams have celebrated their achievements in the pub’s in subsequent years. Among the sports stars to cross the threshold included Shane Lowry, who brought the Claret Jug to the pub the day after his victory in the British Open, fulfilling a promise made to Hugh years before.

In fact, on the wall of the bar you can see the 18th hole flag from Royal Portrush, signed by Shane and presented as a gift to The Boar’s Head. 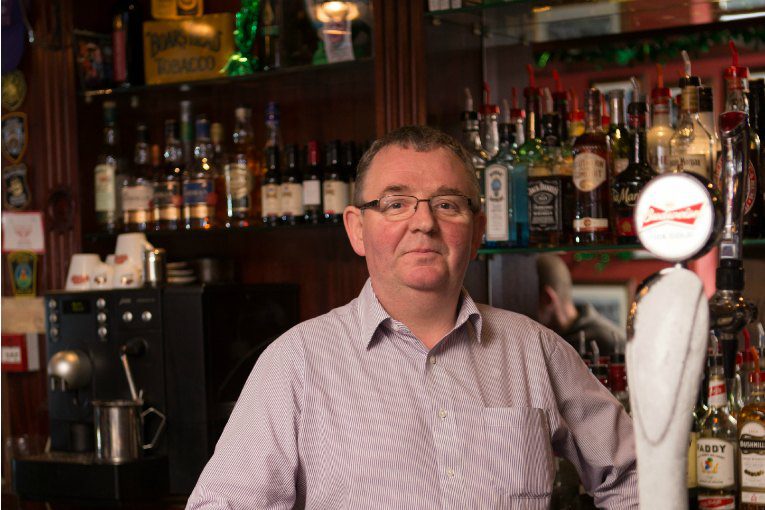 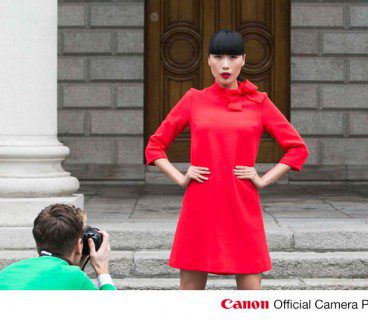 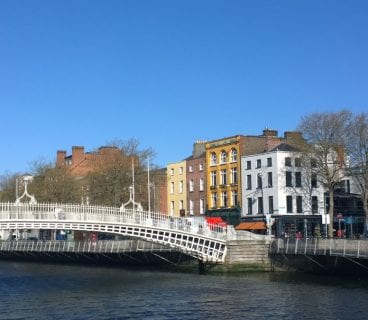 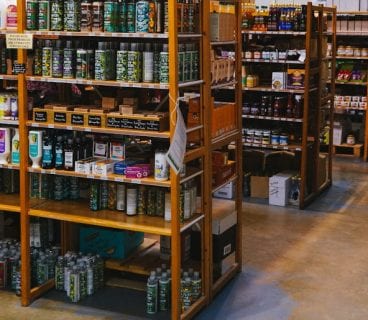