The History of College Green - DublinTown ​

The History of College Green

As part of our series focusing on what makes Dublin City unique we’ve created a series on the history of the streets that make up the heart of the metropolis – and this edition takes a look at College Green.

As you cross the usually busy junction from the Bank of Ireland across to the lower end of Grafton Street, passing the magnificent edifice of Trinity College, it is easy to feel that you are at the very heart of Dublin city. You are at the nexus of finance, education, retail and indeed tourist interest, however, College Green becoming a site of pre-eminence within Dublin was very much a gradual process.

While the early Vikings raised the meeting place of the Thingmote stood close to modern College Green, the focal point of the new settlement was actually further east. The area of College Green in fact stood outside the city walls, the centre of the city focused on Dublin Castle to the east and to a lesser extent the Tholsel building located close to Christchurch Cathedral.

The lands occupied by College Green and Trinity College were removed from the central life of the city and were marshy ground with the banks of the Liffey extending as far as Townsend Street and the River Steyne winding in front of what is now Trinity College. This area lay beyond the most easterly of the city gates, the Blind Gate and the lands of the College had, since the 12th Centruy been occupied by the the Priory of All Hallows, a monastic site founded by Diarmait Mac Murchada in 1166. When King Henry II had become the first English monarch to visit Ireland it was at College Green that a huge temporary structure was build so that the Lords and Kings of Ireland could be suitably hosted as they came to visit him in a show of loyalty over the Christmas period of 1171. 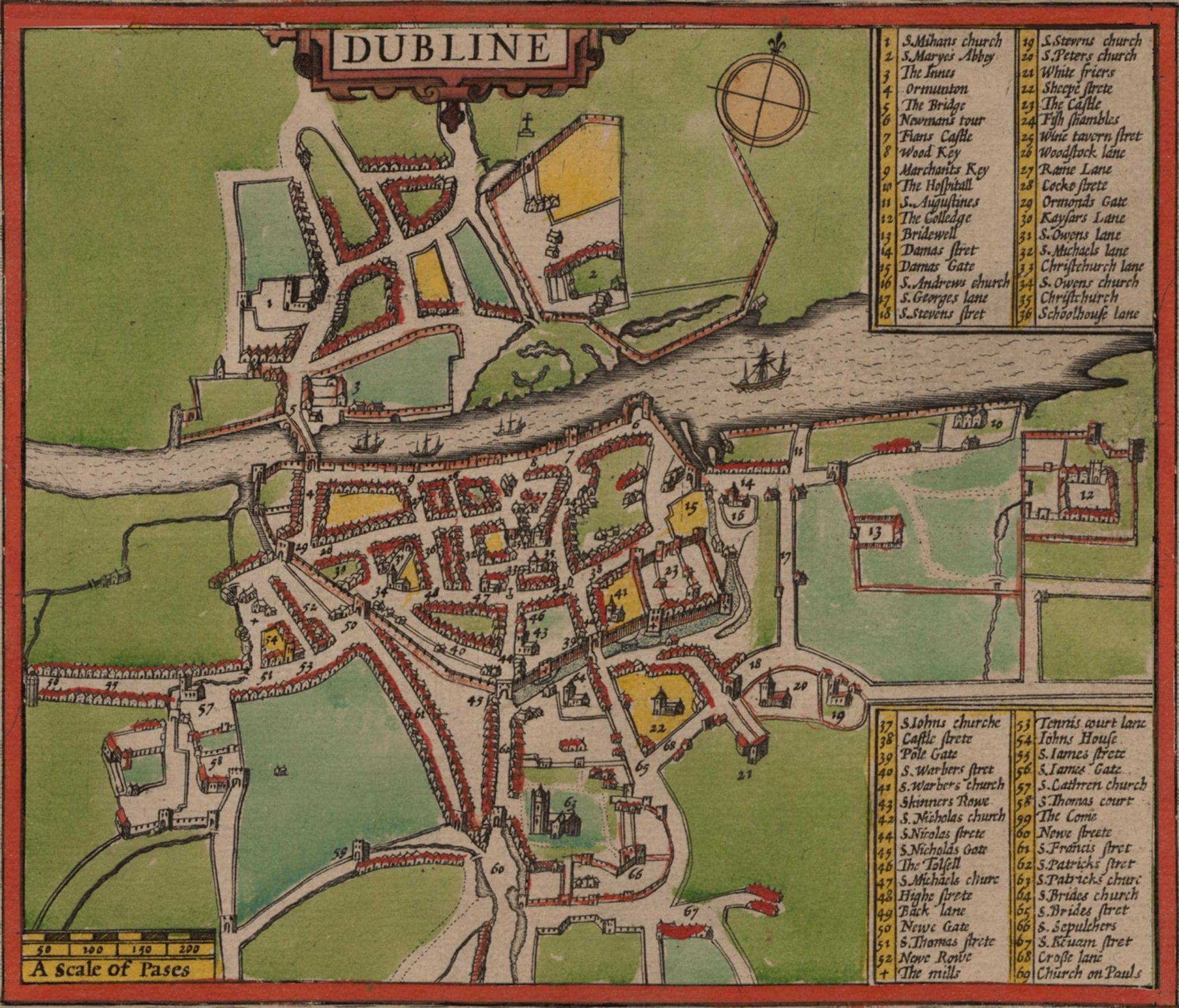 After almost 400 years in existence the Priory was disolved by King Henry VIII as part of the Dissolution of the Monastries that took place after Henry’s split from the Catholic Church. The lands then passed to the Corporation of Dublin and the demolition of the old Priory buildings began in 1539. By the 1590s the Church of Ireland Archbishop Adam Loftus had appealed to Queen Elizabeth I for permission to develop a University for Dublin on the site of the Priory lands, this was granted and in 1593 Loftus became the first Provost of Trinity College, which he had named after Trinity College in Cambridge where he studied.

But the area of commonage in front of the College wasn’t always known as College Green, even after the founding of Trinity. For many years it was referred to as Hoggen Green, this may be related to the fact that much of the lands around parts of Dame Street, Andrew Street and the surrounding area belong to an order of nuns from the St. Mary de Hogges Abbey, which may have given its name to Hoggen Green. Hoggen may be a corruption of the Norse word haugr, which means a mound that could relate back, once again, to the Thingmote meeting place mentioned previously. 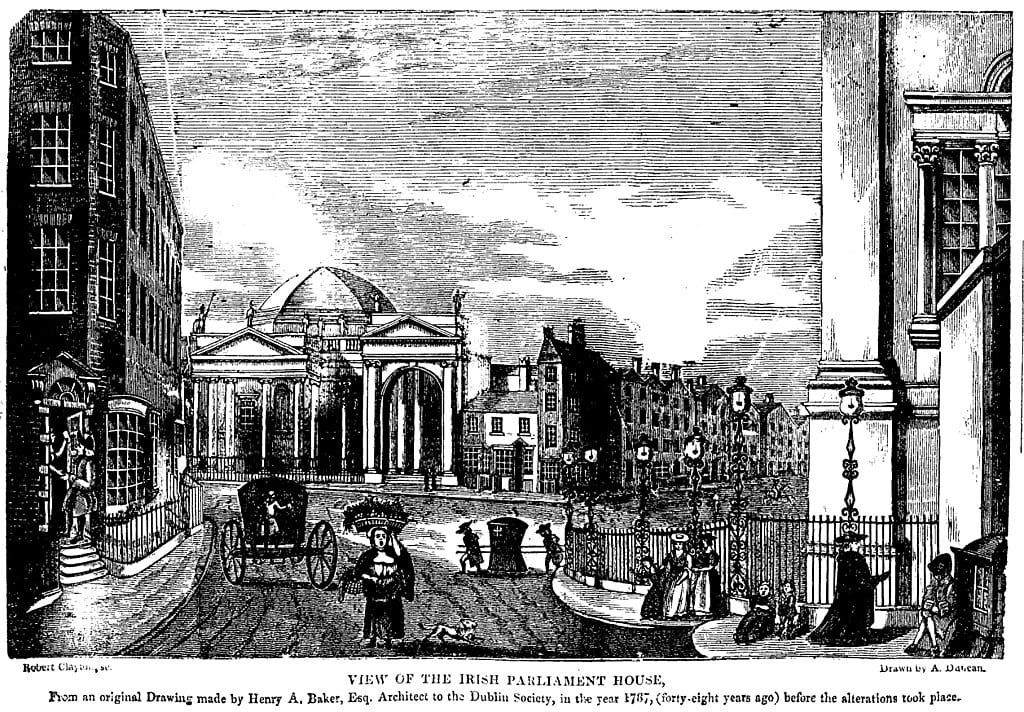 By the late 1600s, College Green had become a desireable residential destination, Sir George Carew the Lord High Treasurer of Ireland lived in what became known as Chicester House, on the site of the present day Bank of Ireland. This building had originally been designed as a hospital but in fact was never used for that purpose, instead it ended up becoming a meeting place for the Irish Parliament.

Chicester House was later demolished and replaced with a purpose built Parliament building designed by Sir Edward Lovett Pearce, himself a member of Parliament. The foundation stone for this magnificent new building was laid in 1729 and would become the world’s first, purpose built, two-chamber parliament building. Pearce died before seeing the building completed and there were significant later additions and redesigns to the building by James Gandon in 1780s. The Parliament house looked out directly onto a statue of King Billy upon his charger, which was unveiled on the 12th July 1701, the date chosen specifically to commemorate the Battle of the Boyne. 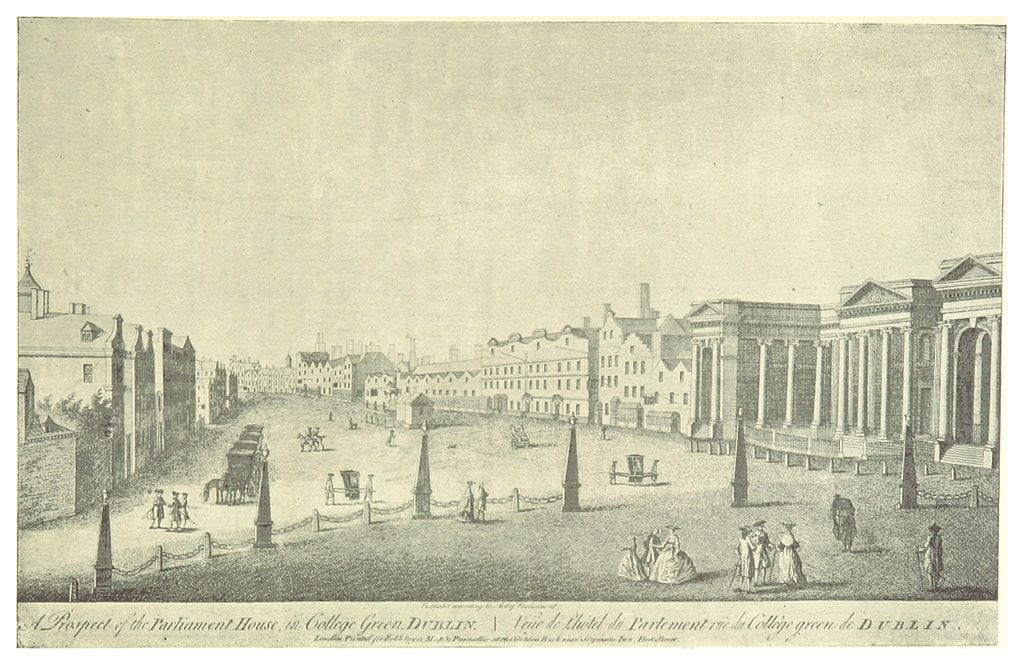 This was also likely to have been around the area where King Henry II had held his Christmas gathering over 500 years earlier. The statue to King Billy (William the Third to give him his proper title) was eventually removed in 1929 after it had been badly damaged by a bomb, the final in a series of attacks and vandalisms that had been visited upon Billy and his horse over the intervening two hundred years. 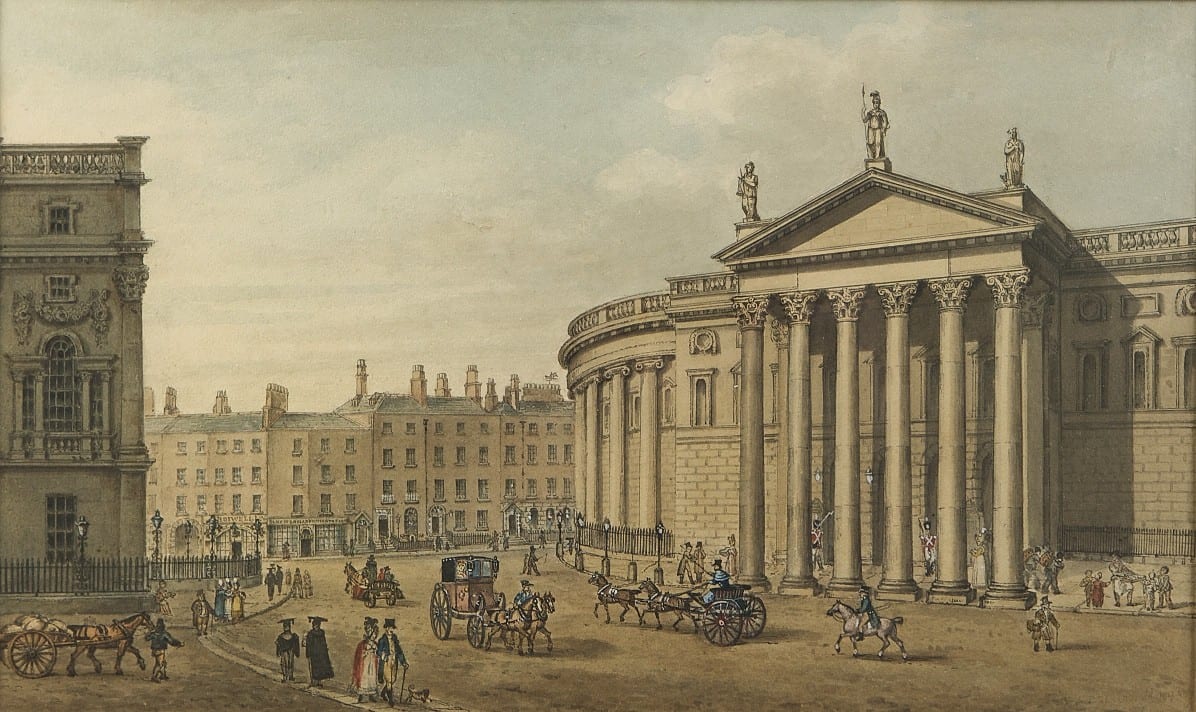 During the 18th Century there were significant changes to the surrounding area, Grafton Street, once just a narrow lane that followed the course of the Steyne and led to St. Stephen’s Green was developed as a residential and later retail street in the early 1700s. By the latter part of the Century the Wide Streets Commission had taken on the major task of widening and improving Dame Street, these commenced in 1777 and would continue for decades. The 1790s saw the opening of the Carlisle Bridge (now O’Connell Bridge), which provided a new link to the northside of the city and the rapidly developing Sackville Street, D’Olier Street and Westmoreland Street were similarly being designed and built as the 18th Century gave way to the 19th. 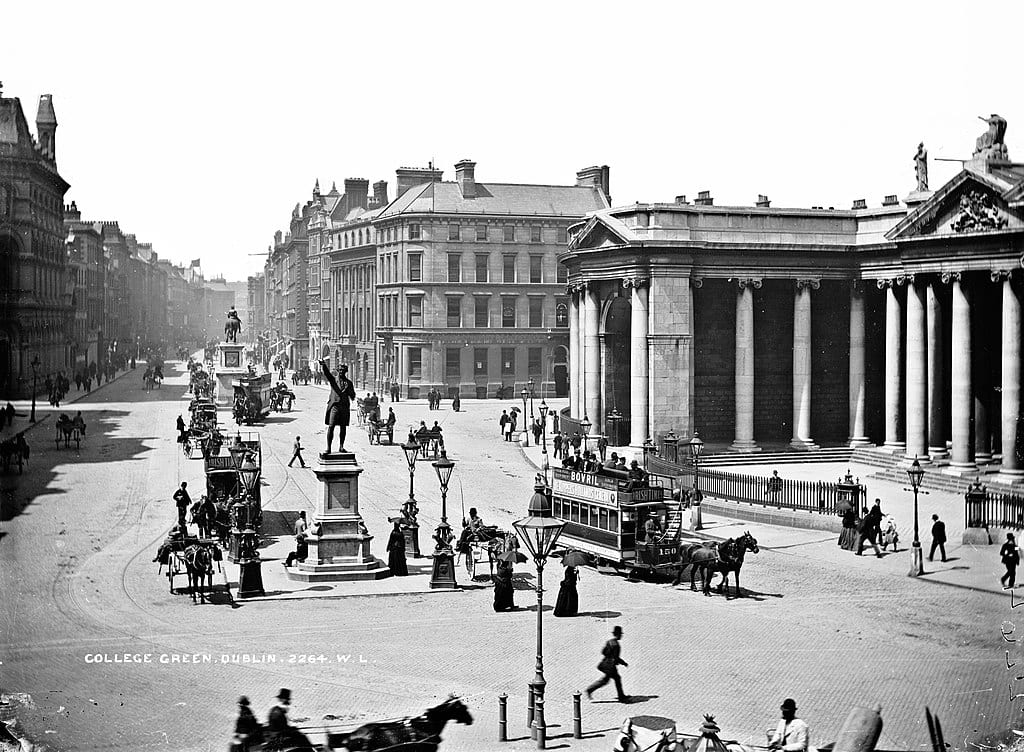 Sadly the great Parliament House of Pearce and Gandon would be home to a Parliament no longer as by 1800 the Act of Union had been passed, which abolished the Irish Parliament, and meant that Irish MPs had to attend parliament at Westminster. This act had been voted down by Irish MPs in 1799 but amid accusations of bribery and corruption was passed a year later and came into force on the 1st January 1801. In 1803 the fledgling Bank of Ireland bought the building from the British Government for £40,000 for use as its headquarters. While much of the interior has changed the House of Lords remains to this day and is open to the public to visit and get a feel for the heart of 18th Century Irish politics. 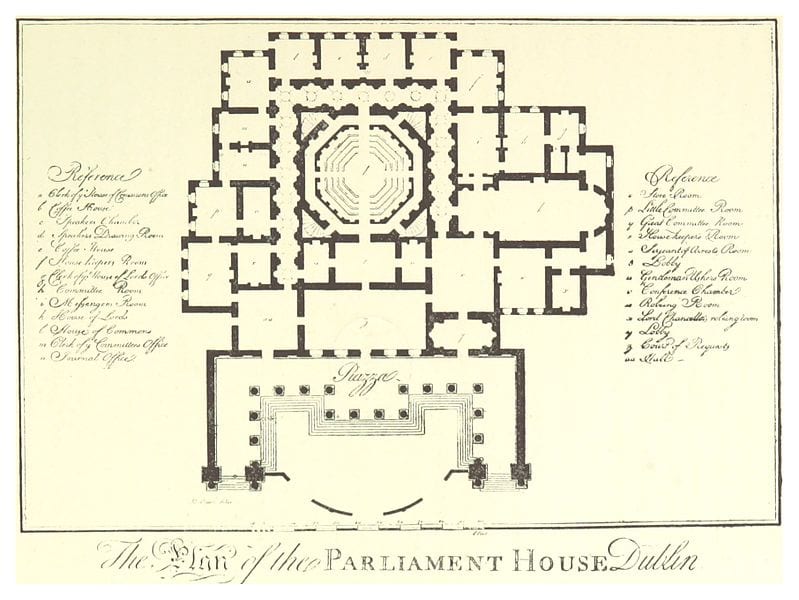 While the adminstrative and Governmental functions have moved on from College Green, banking quickly emerged as a significant use of the area. As mentioned the Bank of Ireland opened its doors in 1803 but other banks quickly followed such as the National Bank, founded by Daniel O’Connell, which opened opposite the Bank of Ireland in a building now occupied by Abercrombie and Fitch in the 1840s. This was very much set up as a bank to support the enterprises of the newly emancipated Irish Catholics and the structure has changed several times in its existence, though the building we see today had been significantly remodelled from the design of the first bank in the later 1880s. 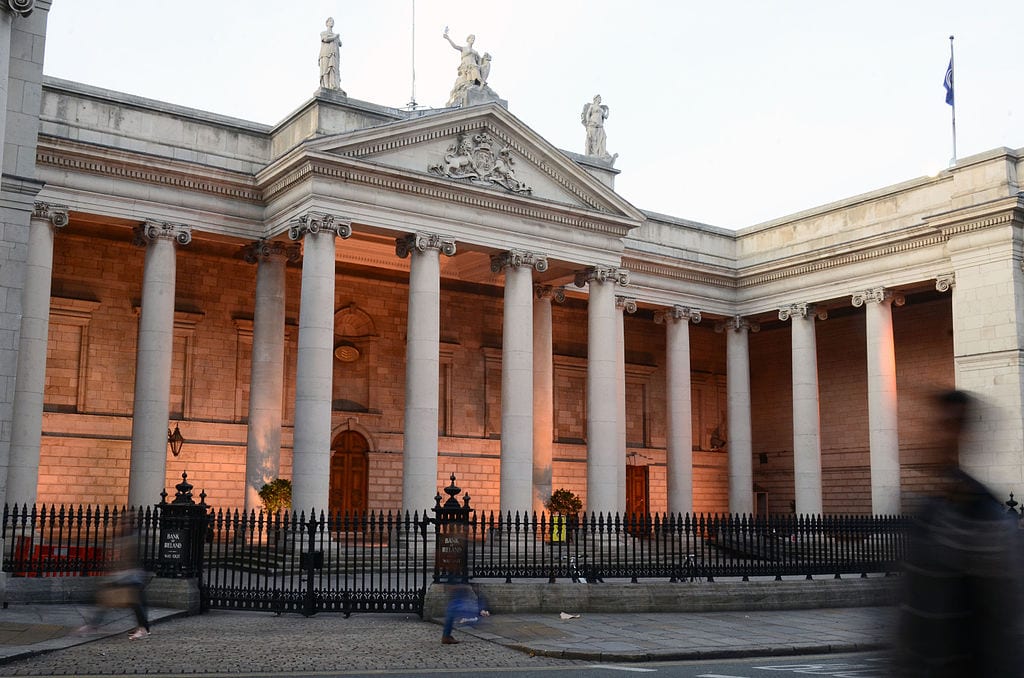 As well as the name, the “National Bank” there is another sign of overt nationalism, the words Éire Go Bragh appear beneath a stone statue representing Erin at the very top of this building. This was the work of James Pearse and Edmund Sharp who were master stonemasons based on what is now Pearse Street. James Pearse was also the father of Irish educator and revolutionary Pádraig Pearse.

Even the location of this bank hints towards a challenge to the established order, facing the Bank of Ireland, which features on its pediment a copy of the Royal coat of Arms of the British monarchy to this day. While the Bank of Ireland’s College Green branch remains very busy to this day, a section of the bank has been given over to the use of the Department of Culture for the hosting of free exhibitions and events, it presently displays the collection of items, writing and correspondence that belonged to Nobel Prize-winning poet Seamus Heaney. 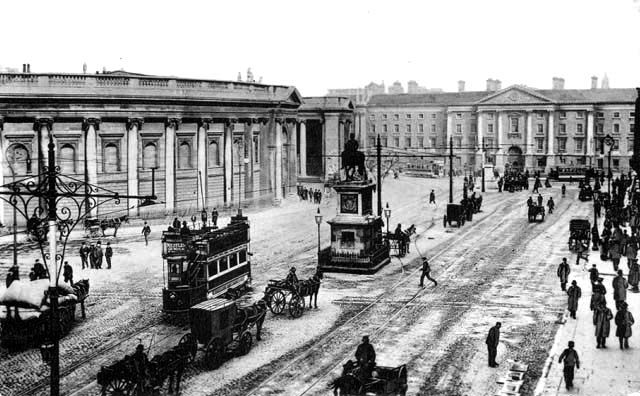 Many other banks and financial institutions began to emerge, the Hibernian Bank (later the National Irish Bank and now a branch of H&M) opened at the corner of Church Lane and College Green in the early 1870s followed a decade later by Ulster Bank across the road. Further down towards Dame Street, in a buiding now occupied by The Bank Bar and Restaurant, was, you’ve guessed it, another bank! This building was once an AIB branch before being taken over by the Chawke Group. While College Green and Dame Street led into the warren of small streets that comprised Temple Bar there were also banks, insurance companies and commerical offices on that side of the street. 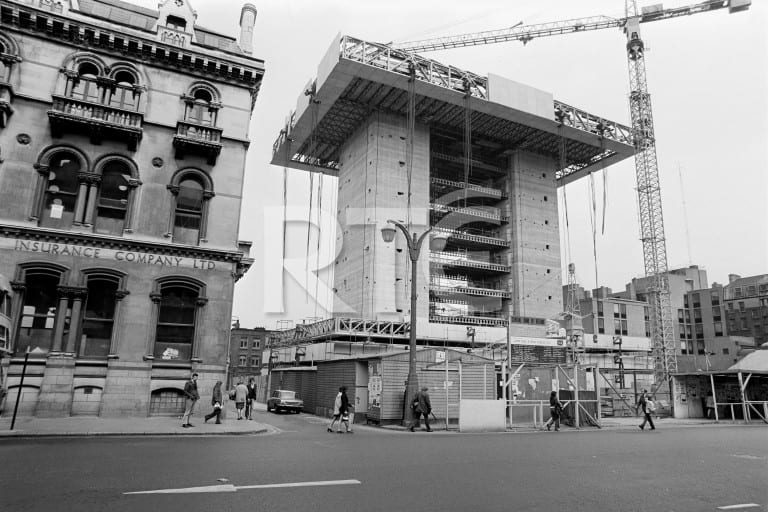 This trend towards banking and financial services continues to this day, although the concentration of such businesses has declined. It was for perhaps these reasons that College Green/Dame Street was chosen for the construction of the new Central Bank building in 1975. Sam Stephenson’s design was controversial but has become something of a Dublin landmark and its adjoining plaza has become a meeting place for generations of Dubliners. The Central Bank operated out of this building for more than forty years before recently relocating to Spencer Dock, their former premises is in the process of being converted into new offices, as well as a range of new cafés and restaurants. Part of this will include a rooftop restaurant and event space, which will allow the ordinary Dubliner to have amazing views over the city.

In more recent decades College Green has taken on a role for important national celebrations or civic functions, such as the homecoming celebrations for the Irish football team from the 1990 World Cup, the visit of Barack Obama or even a number of the New Year’s Eve concerts. What the future holds for College Green remains unclear at the time of writing. Summer 2019 saw a series of trial closures to traffic with the area in front of Bank of Ireland becoming a pedestrian-only space. There are proposals being worked on to make this a more permanent feature of College Green. As far back as the 18th Century the politicians in the Parliament House were complaining about the noise and volume of traffic passing their doors, so perhaps some things don’t change! 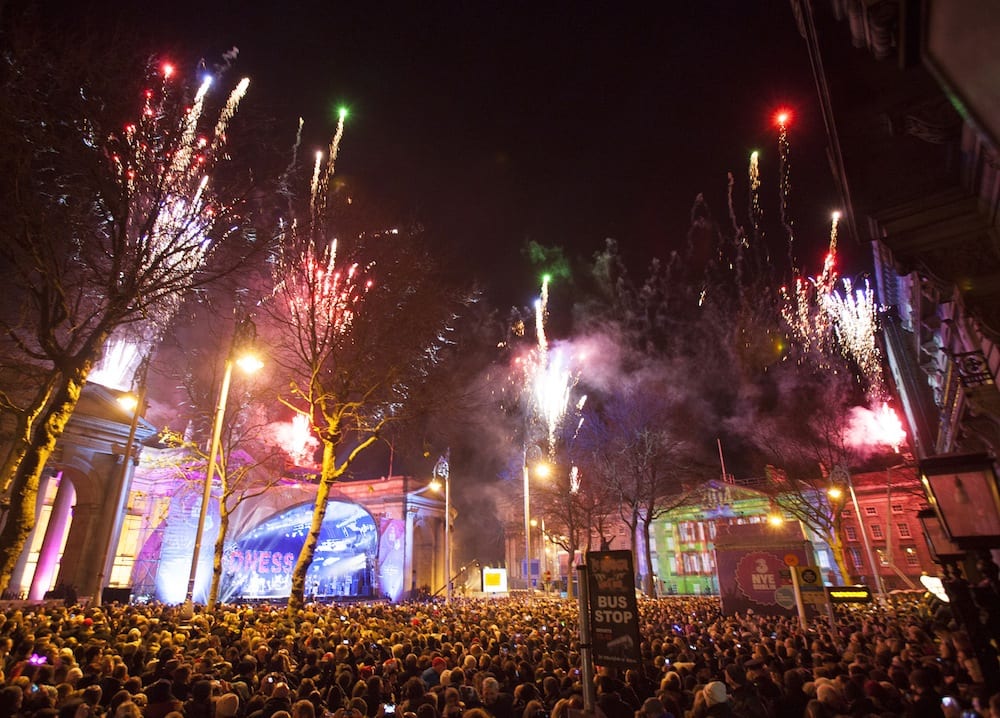 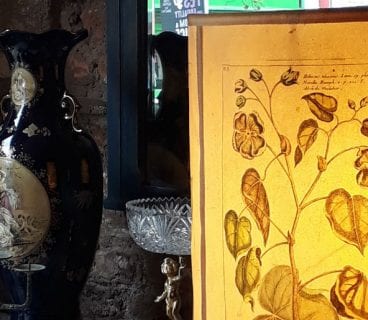 11 Antique and Vintage Shops in Dublin 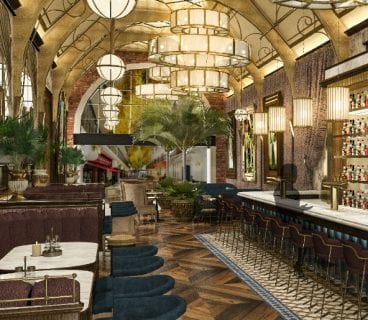 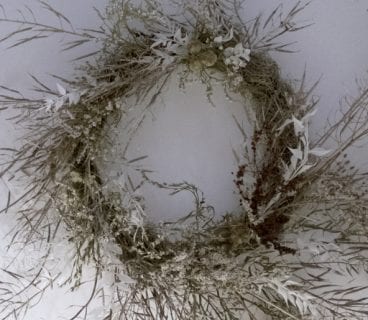 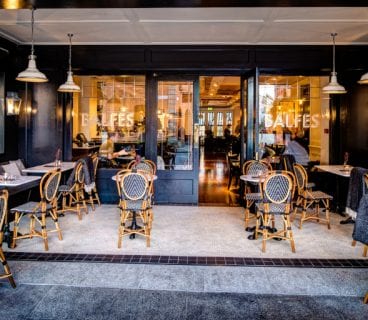