Hosted by Irish Barista Champion 2019 and Bewley’s barista trainer, Wojciech Tysler, the multi-sensory coffee workshop was one of the most interesting and unique events we ever attended

We arrived and were directed to sit at a table with a small number of other guests. Each guest had a sensory station in front of them that consisted of an ipad, headphones and rose tinted sunglasses. My intrigue was heightened already.

As we got settled, Wojciech (who represented Ireland at the world barista championships and came 20th) started by providing a little background into the origin of the exclusive coffee he would be using for the workshop. He gave us a sample to smell as a descriptive picture appeared on the tablet explaining the heritage of the unique blend of coffee. Hailing from the Cerro Azul farm from Valle del Cauca in Colombia, this coffee was nothing like I had ever smelled before. It was somehow fruity, but held onto the rich aroma associated with coffee. 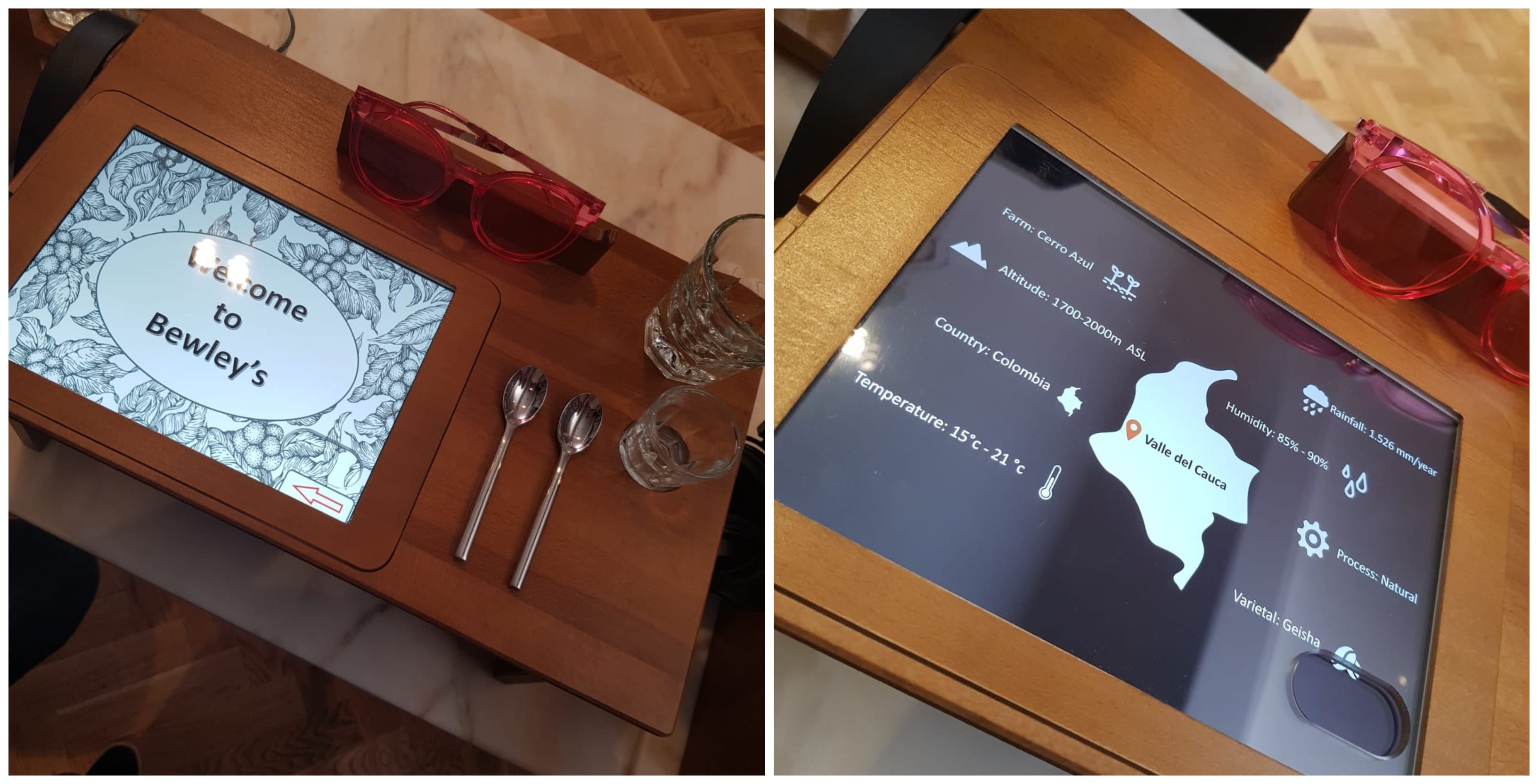 He explained he was going to treat the workshop like a barista championship and pretend us, his guests, were the judges. He would prepare three different coffees – an espresso, a coffee with milk, and (what I was most looking forward to) a signature serve/blend.

As he headed over to a coffee machine that was one of the most beautiful pieces of machinery I’d ever laid eyes on (seriously), Wojciech carefully prepared an espresso for each one of us to try. He placed a lid on the small ceramic espresso cup almost as soon a it has been made and placed it in front of each one of his guests.

As we lifted the lid the aroma gently traveled to our noses and what we were met with was a blended smell of intense coffee and tropical fruits such as mango and apricot. Never had I smelled a coffee so tropical – it was bizarre. Normally I’ve to wait about 10 minutes for an espresso or coffee to cool down before I can brave placing my lips even near the cup’s rim, but this was the perfect temperature. It wasn’t too bitter, it wasn’t too sweet, it was the most sensational tasting coffee I had ever tasted.

I was already on the edge of my seat waiting impatiently for more. Next up was the coffee with milk. Back at the machine Wojciech was expertly preparing the steamed milk and espresso. As he placed another gorgeous, slightly larger, ceramic coffee cup down on the tablet face in front of us, he told us to taste the coffee – and it was phenomenal. Honestly, phenomenal. It was smooth but the coffee wasn’t lost or hidden by the volume of steamed milk, it was perfectly balanced and insanely delicious. Next, he instructed us to swipe the tablet to the left and place our rose tinted glasses on. The screen turned a fuscia pink – that turned even pinker as I placed the tinted glasses on my face. He told us to taste the coffee that we’d just tasted moments before again, and to tell him what we thought. To my disbelief, straight away I realised that the coffee was now considerably more sweet than the first time I tasted it. Wojciech explained it had in fact nothing to do with the coffee itself, and everything to do with the pink tint through which we were seeing the world and the fuscia pink surface the coffee cup was placed on. My mind was officially blown.

Finally, Wojciech’s signature serve. He brought out a board that had more ingredients on it than I ever thought or dreamed of going into a coffee.
He intially added 1% fat milk to the cold foam creator (something that adds micro bubbles into the milk denaturing the protein and creating a texture like ice-cream. Yes, ice-cream). He added a touch of sugar cane syrup as well as mango puree. I know – mango puree and coffee sounds utterly awful but stay with me.
The mango has been macerated with 10g of sugar and left in an aerobic environment for 12 hours at 60 degrees in a water bath. This intensifies the mango flavour but most importantly changes the taste of the drink on the second sip.
He added everything to a hyper chiller to chill the beverage without the dilution of water.
He was so meticulous about his creation, he even used a syringe for the mango to ensure he put just the right amount of it in. This honestly had transitioned so far past coffee making and into the creative and innovative work of someone who truly deserved to be Ireland’s barista champion.
He poured the cold blend into small glassware, and scooped the foamed milk into a dollop atop the most unique concoction of flavours I was about to taste.

For this coffee, Wojciech told us to pop the headphones on and swipe the screen of our tablets to the left once more. A tropical beach scene appeared and waves were gently crashing in my ears. As I did what I was told and closed my eyes and tasted the cold coffee, the experience of the sound, the visual and melon-flavorsome coffee somehow transported me to a far-away tropical paradise when in reality I was sitting upstairs in Bewley’s on Grafton Street. On the first sip the flavour of creamy mango hits the palette, this changes to a tropical fresh Galia melon flavour on the second sip and finally, the refreshing aftertaste of bergamot. But, most importantly. the espresso flavour remains dominant.

It was just brilliant.

A huge thank you to Wojciech and the Bewley’s team for inviting us along to the most incredible unqiue experience in their magnificent cafe on Grafton Street!

The Proudest Dublin Bus Will Lead the Dublin Pride Parade 2018