Written by Daniel Fortes on October 2, 2014. Posted in Updates

Annemarie Hora is attending the One Young World Dublin conference on behalf of DublinTown the Business Improvement District (BID) for Dublin City Centre. Annemarie is a Marketing & Communications Executive with DublinTown, which has over 2,500 member businesses.

Dublin’s the biggest city in Ireland, by a long way. It’s not huge by global standards but when you originally come from a place much smaller in the west of Ireland, then sheer scope of things on offer in Dublin, or Town as we affectionately know it, was intriguing and exciting. Having lived in Dublin for a couple of years now though, I’ve affected a suitably detached blasé approach to urban living but my enthusiasm for my city has never diminished.

The thing about Dublin is that its intimate, it’s a Capital City, with all that that entails but it’s also local, colloquial and compact while still managing to be an international city that is open-minded and outward looking. In the next few lines I’d like to try and talk about some of the things and places that I love about Dublin. I hope you get to enjoy them too and that maybe you find something unique and exciting for yourself…

Watch The Best of DublinTown & It’s People on This Stunning Video.

Grabbing a bite to eat with friends is one of my favourite things to do in Dublin. The last few years have been amazing in the city for the sheer quality and choice of places to eat. Not so many years ago the occasional Chinese take-away was about as interesting as dining in Dublin got but now you have a choice of international cuisine be it great Japanese food in Yamamori , Indian in India Dhaba Italian in San Lorenzo’s or a whole range of quality Irish fare like Fallon & Byrne, Le Bon Crubeen or 101 Talbot .

You might already know that here Dublin is that we’re quite famous for our pubs and pub culture. For a long time people just focused on their pint of stout in Temple Bar, and although that’s great fun there is loads of choice and variety throughout the city. We’ve broadened out from just pints of Guinness to an Irish Craft beer revolution in recent years and the emergence of some great cocktail bars. My personal favourite is 37 Dawson but if cocktails aren’t your thing there is something for everyone; whether it’s a bowl of stew and some traditional music in O’Neill’s, comedy in the Stag’s Head or a pint with the stars of stage in the Flowing Tide. However, our pubs aren’t just about having a drink, they’re about socialising, entertainment and having the chats and banter. If you’re asked to go for “a drink” by an Irish person it usually means 3-4 hours of intense conversation, but guaranteed is a laugh. While most attempts to leave will be met by your new found Dublin friends with a plaintive “ah sure you’ll stay for one more”, so if you really have to leave for that early start you’ll need to be strong willed!

If on the other hand you fancy heading on to a club or off to see a band there are a multitude of options. We’re the city that gave the world rock legends like U2 and Thin Lizzy but there is also a vibrant local music scene. Kodaline, The Script, and the Coronas have all emerged from the Dublin scene in recent years and there is such an array of talented bands, singers and DJs that there is something to suit all tastes. A couple of personal favourite venues are The Grand Social which is just over the iconic Ha’Penny Bridge, Twisted Pepper or Lost Society which is in the Creative Quarter which is at the heart of Dublin’s Purple Flag zone. Purple flag basically means that it’s the place to go to be guaranteed a great and safe night out. 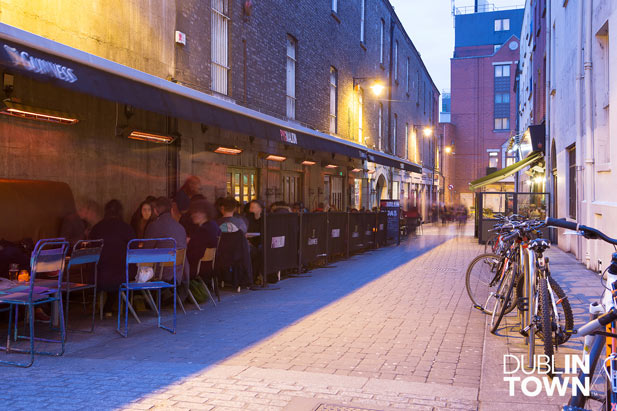 So I’ve covered eating and going out, which let’s face it are the things that everyone wants to know when you’re on your way to a new city, I hope that the I’ve given a nice wide variety of recommendations, I’ve tried to think of places where you’ll get to see the real city and enjoy the chance to experience the city as Dubliners do. Dublin isn’t just food and drink. We love to shop and we’re fiercely proud of the artistic and cultural legacy that we’ve left to the world.

Growing up, Dublin was always the place we would come for a holiday, a trip to the Zoo or the excitement of Christmas shopping. It usually involved a day out early in December and an entire day being dragged up and down Henry Street and Grafton Street. Now that I live and work in the city centre I get to the walk down those famous shopping streets every day but usually my fashion appetites are bigger than my bank balance. We’ve got all the main high-street brands that you’d expect to find in any Capital city, we’ve got Europe’s first Forever 21 and its biggest New Look at the Jervis Centre only a stone’s throw away from the North side’s iconic department stores Arnotts of Henry Street and Clery’s of O’Connell Street (one of the first purpose built department stores in Europe) as well as Grafton Street’s great shopping palace Brown Thomas which is South of the river. Despite our quality international offering a significant majority of our retailers are Irish owned (many are family owned) and are specialist and boutique in their appearance. These retailers have grown in popularity, there are plenty of them in the Dublin’s Creative Quarter or in places like Capel Street , my advice is always to get a bit lost, don’t go in with fixed expectations and you’ll be amazed what you might find.

For Arts and Culture in Dublin we really are spoiled. Beginning on the Thursday of the One Young World conference Dublin will also be hosting Openhouse ; a series of free events and tours which invite you to explore the rich architecture of Dublin and if you are staying in Dublin a bit longer you should check out the Bram Stoker Festival (Dracula was a Dub!) and the subsequent Hallowe’en shenanigans (we love any excuse to dress-up and we invented Hallowe’en centuries ago) and that’s before we mention our great theatres famed for their contribution to drama like the Gate, the Abbey or the Gaiety , there are great libraries, museums and galleries, you can see an enormous shark hanging from a ceiling or a dead Viking nobleman found in a bog, a giant mummified Crusader or the relics of St. Valentine. I could go on but I probably shouldn’t at this rate.

There is something for you all in DublinTown, I’m so excited to have the opportunity to talk to you all about my city so please take the chance and see as much as you can, I know you won’t be disappointed. The work I do for DublinTown as a Business Improvement District is all about trying to add to the appeal and vibrancy of the city and highlight the great stuff that already goes on, it’s a job I couldn’t do if I wasn’t passionate about it and I hope this comes across in my ramblings above. Remember that our DublinTown Ambassadors will have a stand in the convention centre each day of the conference so you don’t just take my word for it, drop by and say hi, they’ll be happy to help you plan your day in DublinTown.

Things to do in Dublin this May Bank Holiday